What can you do to win the war with Yelp

By Florian | Marketing for Optometrists, Marketing Tips | No Comments

If you’ve been trying to get reviews from your patients or clients on Yelp, you will know that it is possibly the most difficult review site to get reviews published in the main section of your business listing. If you have not, as a business owner, you need first to understand why reviews on Yelp matter for your practice or company. After looking at the main issues with Yelp reviews, you need a simple plan on how to get reviews to stick on your Yelp page. We will point you in the right direction. 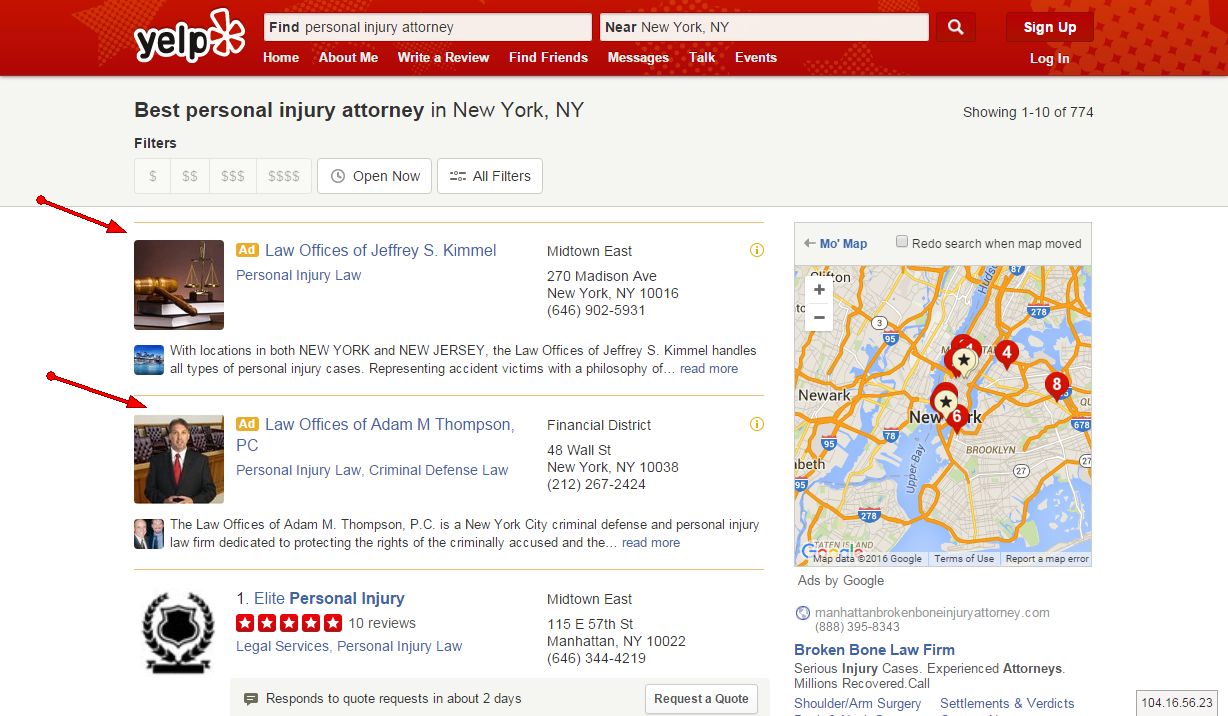 Should You Advertize Your Firm On Yelp ?

A couple of months ago I had a lawyer ask me if it was worth advertizing his firm on Yelp. I gave him the typical politician’s response: “it depends…”.

I mentioned that we had not reviewed enough cases of firms advertizing on Yelp and tracked and analyzed their results in a way that allows us to come to a sound scientific conclusion and give a clear response.

With that being said, I also told him that the feedback we have read & heard from other law firms, the results they got seemed disappointing.

First, what exactly do we mean by “advertizing” on Yelp ?

We’re not talking about having a free business listing on Yelp, which you should of course have given it’s the second most important Review site in North America (after Facebook – Yelp used to be #1 only a year ago). We’re talking about paid advertizing on Yelp: you can pay Yelp to have your Ad displayed in Yelp search results and on competitor’s Yelp business pages. Unfortunately you don’t have control over listing placement.

It’s a “pay-per-click” advertizing model, meaning you pay Yelp each time somebody clicks on your ad. For the U.S. based law firms that were part of a case study* the average cost per click was 10US$ – US$12.50.

Why would a law firm consider Yelp in the first place ?

* Referencing one article by Casey Meraz in April 2015, here is a summary of the findings: out of the 3 firms that were “surveyed”, all of them reported that the issue was with the quality of the leads generated through Yelp paid ads, resulting in no signed clients.

As Christian Denmon, one lawyer part of the case study, states:

We advertised on Yelp! for a short period of time hoping to generate leads for our firm before pulling out. The traffic quality was not great and we were able to get more qualified leads from Google and Bing/Yahoo! PPC efforts on the paid side. When people are searching for a lawyer, they are more likely to do an organic search on Google as opposed to going to Yelp!

Conclusion – so should you disregard Yelp altogether ?

While the case studies clearly pointed to Yelp Paid Ads not being cost effective to generate new signed cases, Yelp can still help your firm generate new clients and should still be part of your marketing strategy – just not through the paid ads. Here is what parts of Yelp can be made to work for you:

So don’t throw the baby with the bath: forget Yelp Paid advertizing, but leverage Yelp’s other features to increase exposure and conversions